Jetboil and Primus seem to have cornered the market on convenient, reasonably light, stove systems. They have various models, from lightweight one man systems, to heavier multi person systems. There are competitors, but only a few, Fire Maple being one of them. But now there is another, although it is essentially a re-branded Fire Maple. Roll out the carpet, the Alpkit BruKit is here. 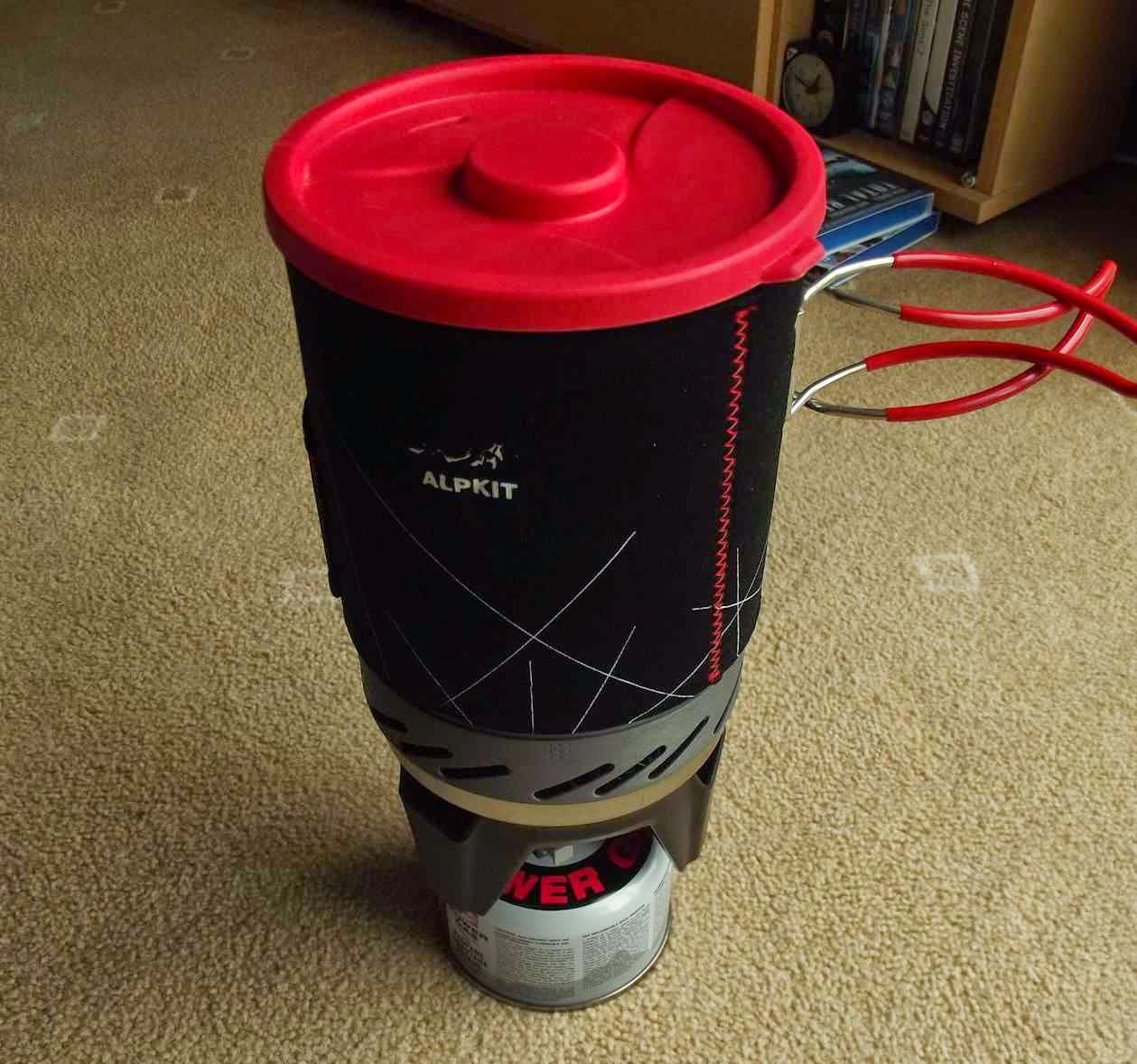 Overview
Like other stove systems it is made up of several components. Those are, a pot with lid, a Neoprene cosy around the pot and a burner, which the gas canister attaches to. Some systems include a small cup, including the Fire Maple. The Alpkit BruKit however, does not.
Like the rest, the BruKit has a large enough pot for the burner and a 100g gas canister to fit snugly inside. This doesn’t really leave much room for anything else, other than may be a cloth and a small ferrocerium rod and striker. The canister stand I use with the stove however has to ride along in the top of the bag. Not ideal, especially considering the larger size of the BruKit pot over that of the Jetboil ZIP which has room inside for everything. So maybe not quite so much design put into the stowing of the system.
Although I believe a ferrocerium rod and striker may fir between the burner and the gas canister. The stand will just have to be left out in the cold. 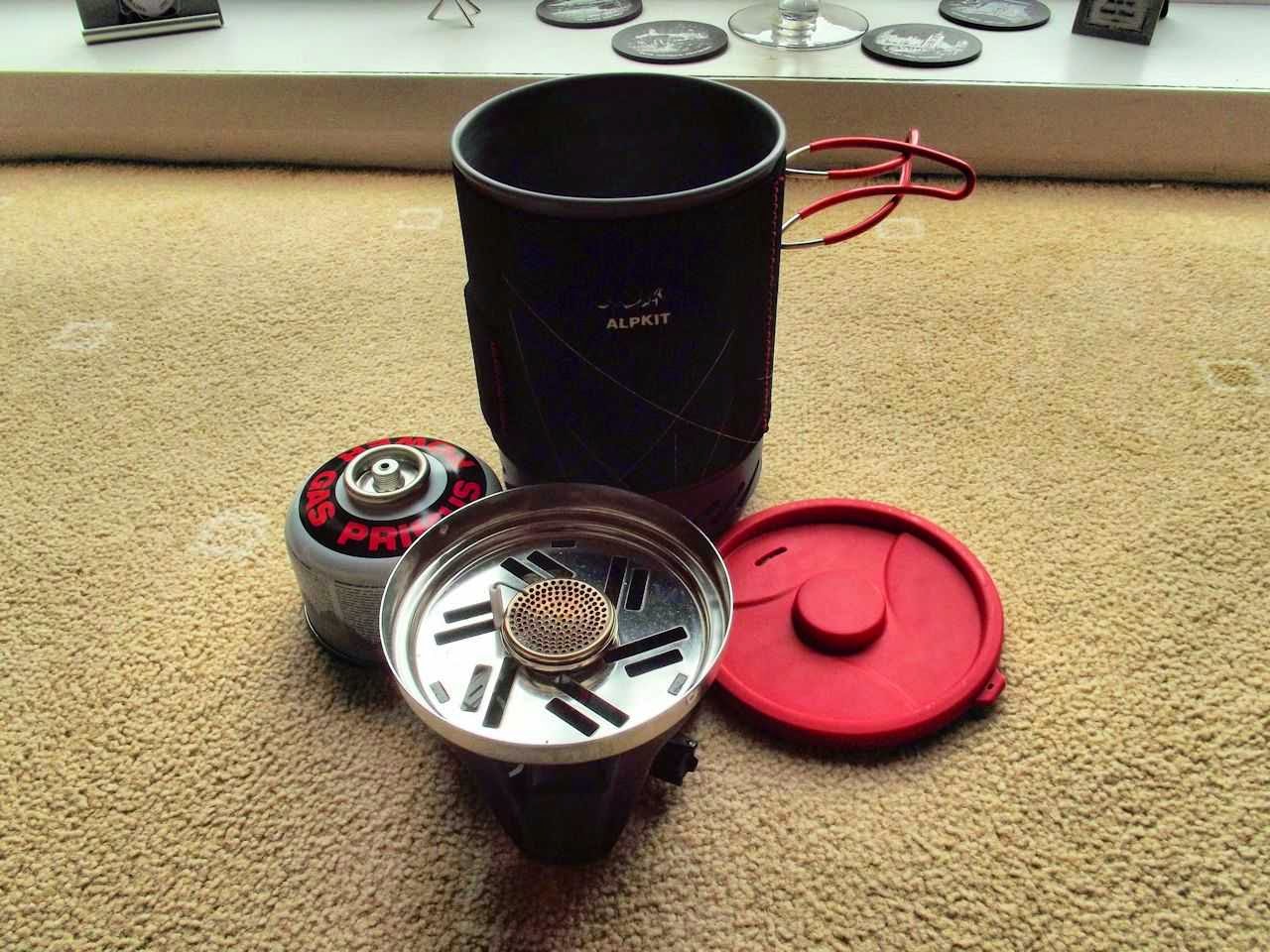 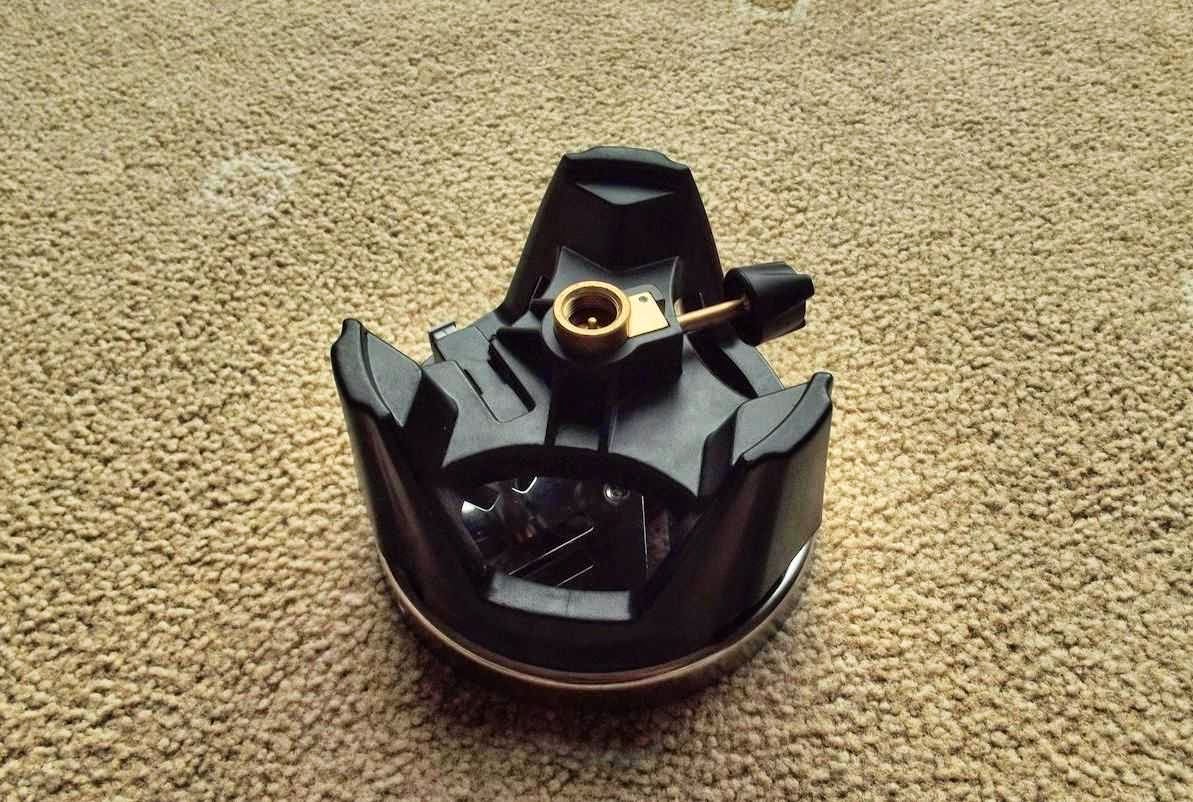 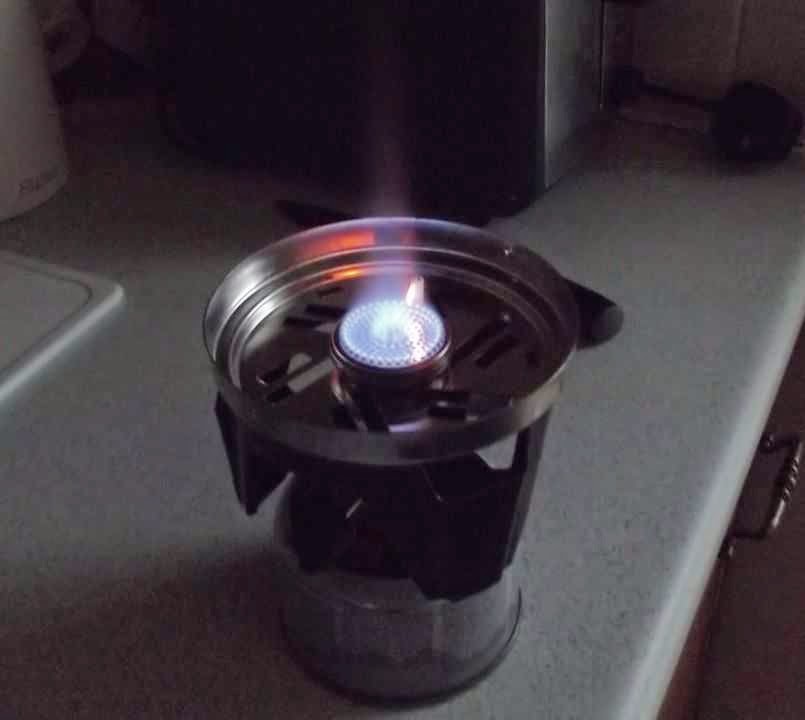 I own a Jetboil ZIP, it’s very good. Although it’s not quite an apples for apples comparison, I have used the specifications, performance, and price as a guide. This permits you something to compare against, while remembering there are differences which do not permit an exacting head to head comparison.
So first off, the boiling times, with the BruKit first and the Jetboil ZIP second, as a guide. The BruKit has a stated power output of 1500W
Alpkit BruKit boil times indoors:
• To boil 1 litre – 7:25
• To boil 0.5 Litre – 5:00 (300 seconds)

Fuel Usage
This is where I had a pleasant surprise considering the cost and boil times for the BruKit. I used the same gas canister throughout. I also wiped the canister down between uses so as not to influence the weight results with condensation on the outside of the can. It’s also important to remember that I used digital weighing scales, which means it weighs to the nearest whole gramme. So there is the potential for a +/-1.0g error. I used a Canister of Jetboil gas for the test. Each boil test was carried out until a full rolling boil started.
First up was a half a litre boil test. I tested the Jetboil ZIP first, which resulted in a 5g of gas consumption. Next I tested the BruKit with half a litre of water. This resulted in a 6g of gas consumption. Finally I tested the BruKit with a full litre of water, a feat the Jetboil ZIP is incapable of, but should provide more useful information. The resulting gas consumption for one litre was 10g. This was quite a result considering the potential error in using a digital rather than analogue measure. So the BruKit uses between 9g and 11g of fuel to boil one litre. For half a litre that would be 5g to 7g of fuel. Not bad for £35 including delivery.

Weight
To some, the table below will be most important information, a weight comparison. The ZIP is very lightweight, so worthy as a guide.

How easy is the BruKit to use? It is very easy to use. It’s easier than my Jetboil ZIP. The measuring markers on the side are very clear, in 250ml steps. There is a quite large knob to operate the gas flow, although this seems as limited as that on the Jetboil. Not quite all or nothing, but it was fiddly to get a steady flame, rather than a jet. The best part was the pot to stove locking system. This is a very easy task, as the way the locking system works, connecting the pot to the stove, and removing after boiling, is very slick. I didn’t have to fight with it, or risk holding somewhere that might risk a burn……..nice! Personally, I’ve taken the Neoprene cosy off my pot. I know it helps to insulate, but I like the removable, rubber coated handles. But there is one major reason I have taken the cosy off. It doesn’t play nice with the supplied mesh bag. Trying to get the mesh bag over the pot, with the neoprene cosy in situ, will lead to angry men on the fells. Once I find an alternative to the mesh bag, the cosy may make a return, I will see. 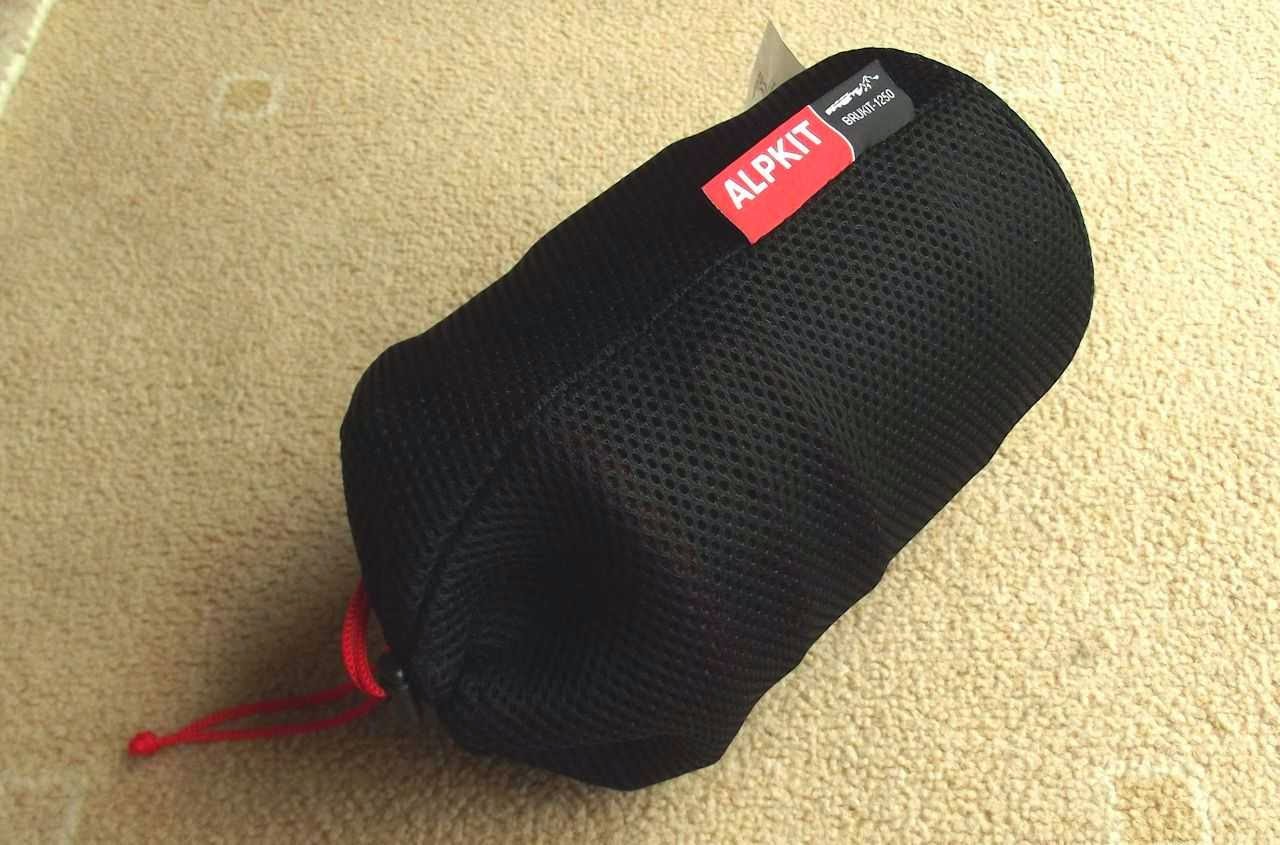 My only point of worry is the built in piezo ignition. I have read reviews and articles that mention these failing. My ferrocerium rod and striker have no moving parts, except for me, and never let me down. This is the method I use to light my Jetboil ZIP. And I will be adding one to the BruKit as well. A gas stove is useless if you can’t light it.

As a solo water boiler, because that is what all these system generally are, it is fairly heavy and the Jetboil ZIP may be more appropriate. But since it is more of a two person stove, able to boil enough water for both two dehydrated meals and a wash-up, or two drinks and a wash-up, it makes a for a lighter proposition.
Fuel consumption is very respectable, even if boil times are a little slow compared to some of the high performance competitors.
So what separates the BruKit from the rest? It is mainly one thing, the price. The Alpkit BruKit comes in at a total price, including delivery, of £35. Yep, you read that correctly, £35. This price point really throws the cat amongst the pigeons, making the BruKit a very competitively priced option for occasional use by two people.
To sum up:
Pros
Cheap, very cheap
Connection between pot and stove stable but very safe and easy to separate
Removable and very usable pot handles
Piezo Electric lighter…….maybe
Clear volume indication
Neoprene pot cosy, with just one negative
Respectable boil times for cost
Cons
Neoprene cosy is at conflict with the mesh bag
Needs a gas canister stand for stability
Slower boil times than competitors

Still to come
I will be performing some boil tests and gas use in more realistic conditions in the near future when I get a chance to do so. From this I should be able to feedback on wind tolerance for the BruKit, or not as the case may be.

https://www.alpkit.com/products/brukit
Posted by Unknown at 08:23
Email ThisBlogThis!Share to TwitterShare to FacebookShare to Pinterest
Labels: Gear Reviews